How to write a custom syntax highligher for your favorite Network OS CLI and integrate it the doc engine?

Read in my post "SR Linux Syntax Highlighting with Pygments" at learn.srlinux.dev portal.

This week I have authored two tutorials for our https://learn.srlinux.dev portal.

The prime reason for this deep dive was to help our customers marry Ansible automation platform with network operations on SR Linux NOS. While I am personally not in the camp "Ansible for network automation" users, the reality is that it is still used by many small/mid teams who by now have large collections of playbooks and trained engineers.

Two years ago, a dozen contributors less, 400 Pull Requests, and 2000 commits behind, another pet project appeared on a vast GitHub landscape. It was a learning exercise by Karim Radhouani to sharpen his skills in gNMI - a niche network management protocol promoted by the Openconfig group.

Initially named gnmi_client, it had a noble but narrow scope of providing a feature-rich, complete, yet intuitive CLI for gNMI-enabled routers. Fast forward two years, and we have the gNMIc software suite that is much more than just a CLI for gNMI.

Today, Nokia donates the gNMIc project to Openconfig, and with that move, we expect to see gNMIc adopted by even more companies and organizations

In this post I'd like to give you a brief overview of gNMIc's core features and share my thoughts on what we expect to happen with gNMIc moving under the Openconfig's wing.

Once in a while, one still needs to get down to a VM-land and dust off some guestfish skills.

Like today I got the IPInfusion OcNOS qcow2 image whose devs decided it is best to use VNC console by default. VNC console for a text-based terminal...

So along come guestfish commands.

Here comes the second episode of the NetRel show: NetRel episode 002 - DIY YANG Browser. Be ready to dive into the paths we took to create a YANG Browser for Nokia SR Linux platform.

YANG data models are the map one should use when looking for their way to configure or retrieve any data on SR Linux system. A central role that is given to YANG in SR Linux demands a convenient interface to browse, search through, and process these data models.

To answer these demands, we created a web portal - https://yang.srlinux.dev - it offers:

Okay, here goes my first attempt fitting the shoes of a content creator.

Please welcome the NetRel episode 001 - Decoding gNMI with Wireshark, it is a 35min journey of using Wireshark to parse the gNMI traffic (both non-secured and secured).

I won't spend your time explaining the first episode; instead, let me tell you what I want the NetRel series to be about. I am interested in covering the aspects of network automation that are not widely covered.

As the networking industry is (slowly) moving towards forklifting networking functions to the cloud-native space we often become the witnesses of mixing decade old tools with cloud-native approaches and architectures.

This post is about one such crazy mixture of using screen scraping library scrapligo with kubectl exec and docker exec commands.

It's been almost two years since Nokia announced its Data Center Fabric solution. The three-layered solution ranged from hardware platforms all the way up in the stack to the DC fabric lifecycle management suite - Fabric Services System (FSS). 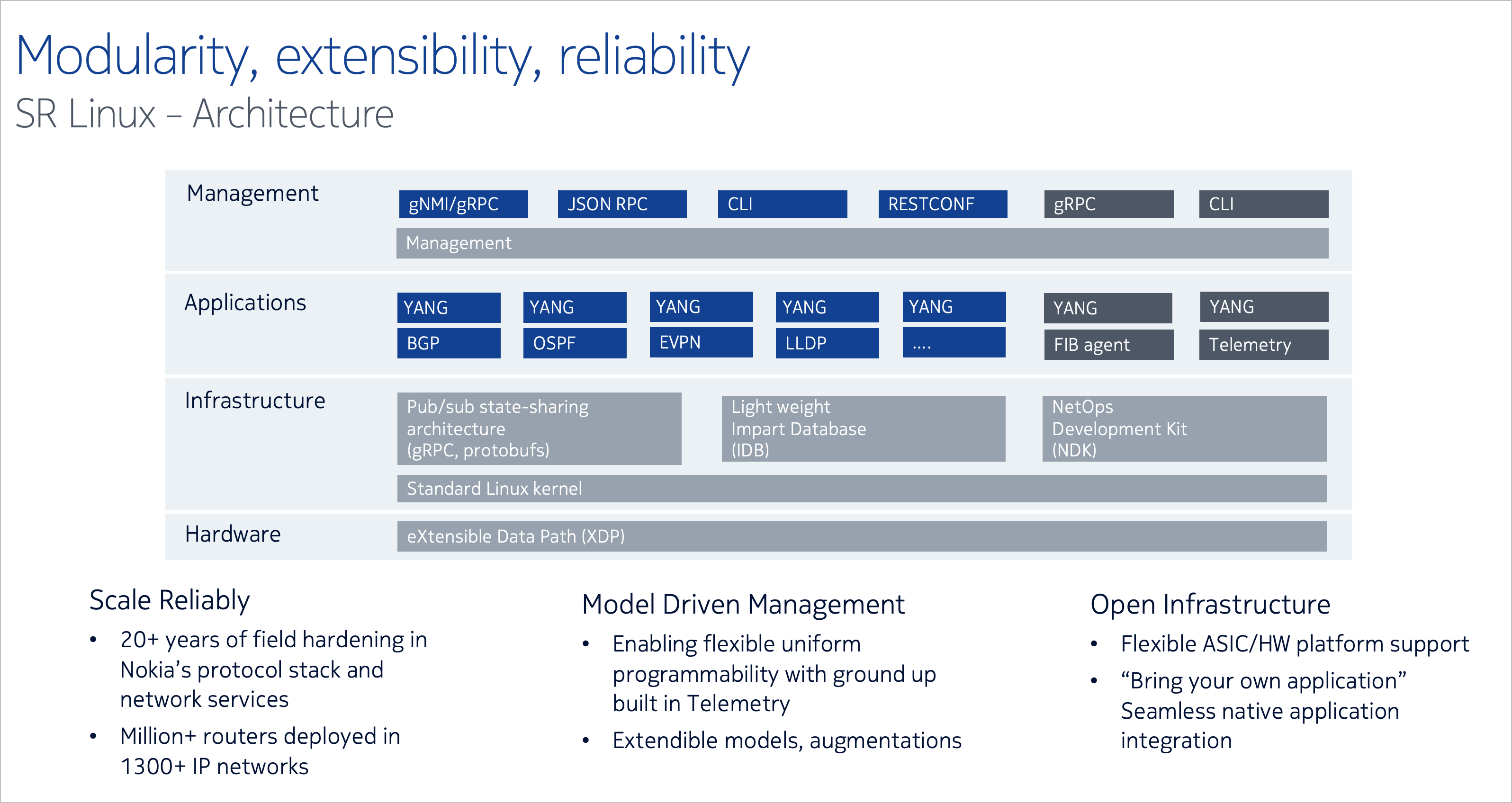 SR Linux comes with quite some interesting and innovative ideas. By being able to design the NOS from the ground up, the product team was freed from the legacy burdens which will be there have they decided to built the NOS on top of the existing one. Features like:

are the result of taking a fresh look at the modern data center networks and building the NOS for the Netdevops era.

No wonders engineers around the world wanted to play with SR Linux and take those features for a spin first hand. And today it is finally possible!

Just recently the network automation folks witnessed a great library to be ported from Python to Go - scrapligo.

Been working on learning go a bit and have published scrapligo https://t.co/NDXQ6khxCr -- still a work in progress, but has been a fun learning experience! Check it out and let me know what ya think! 🤠

For me personally this was a pivotal point because with scrapligo the Go-minded netengs can now automate their networks with a solid and performant library.

One of the things that scrapligo packs is, of course, the ability to reliably talk to the network devices using the same command line interface as a human would normally do. That means that scrapligo would send and receive the pieces of data that an operator would send/receive if they were connected with a terminal over SSH.

Containerlab - your network-centric labs with a Docker UX

With the growing number of containerized Network Operating Systems (NOS) grows the demand to easily run them in the user-defined, versatile lab topologies. Unfortunately, container runtimes alone and tools like docker-compose are not a particularly good fit for that purpose, as they do not allow a user to easily create p2p connections between the containers.

Containerlab provides a framework for orchestrating networking labs with containers. It starts the containers, builds a virtual wiring between them to create a topology of users choice and then manages a lab lifecycle.

Containerlab focuses on containerized Network Operating Systems such as:

And, of course, containerlab is perfectly capable of wiring up arbitrary linux containers which can host your network applications, virtual functions or simply be a test client. With all that, containerlab provides a single IaaC interface to manage labs which can span contain all the needed variants of nodes: