Two years ago, a dozen contributors less, 400 Pull Requests, and 2000 commits behind, another pet project appeared on a vast GitHub landscape. It was a learning exercise by Karim Radhouani to sharpen his skills in gNMI - a niche network management protocol promoted by the Openconfig group.

Initially named gnmi_client, it had a noble but narrow scope of providing a feature-rich, complete, yet intuitive CLI for gNMI-enabled routers. Fast forward two years, and we have the gNMIc software suite that is much more than just a CLI for gNMI.

Today, Nokia donates the gNMIc project to Openconfig, and with that move, we expect to see gNMIc adopted by even more companies and organizations

In this post I'd like to give you a brief overview of gNMIc's core features and share my thoughts on what we expect to happen with gNMIc moving under the Openconfig's wing.

Over the past two years, gNMIc became a feature-rich gNMI-focused software suite. Both its CLI and collection capabilities matured with lots of new integrations added. Moreover, gNMIc had quite some air time in production networks, not to mention lab deployments and dev testbeds.

I would like to briefly highlight gNMIc's current feature set for those who aren't familiar with it yet. Broadly, we split gNMIc capabilities into the following three domains:

Each of those domain areas packs a hefty number of neat features, and I will only highlight some of them to keep the introduction short and sweet.

gNMIc cherishes documentation; readers are encouraged to follow the links provided in this post to get more information on particular topics.

gNMIc provides an intuitive yet full-featured CLI for interacting with gNMI-capable targets. It fully implements gNMI v0.7+ specification with extensions1, and with the move under Openconfig, it becomes a standard gNMI CLI tool.

In 2020 I wrote about gNMIc highlighting its CLI capabilities. Since then CLI side of gNMIc has only become better with the following changes:

Having a great CLI was just the beginning; the lion's share of changes happened in the collector area of gNMIc. 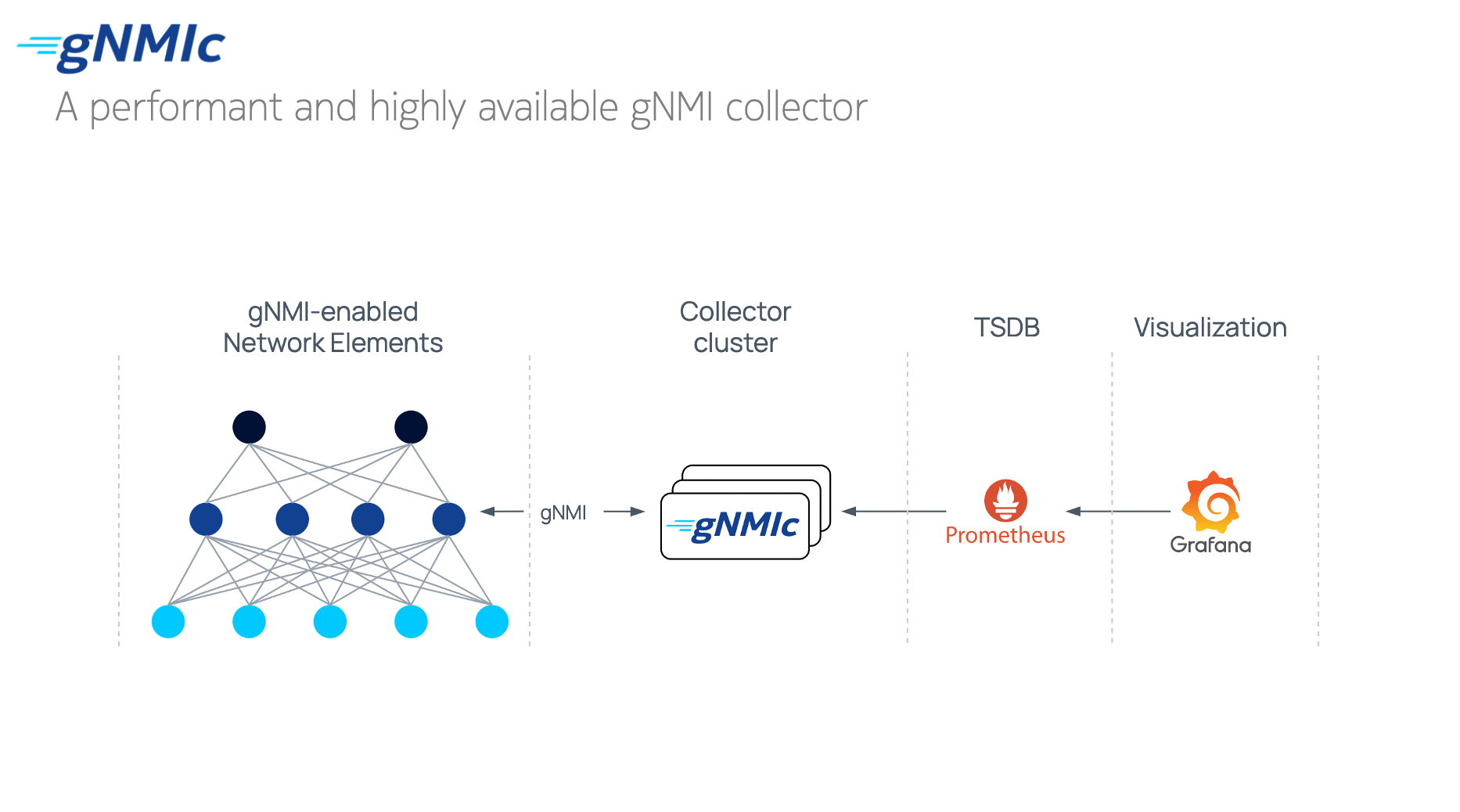 With the growing interest in Streaming Telemetry, we saw an opportunity to create an open-source telemetry collector to meet the demand. Not just a collector, but the open-source collector that can survive a production deployment with all its requirements. I'd like to believe that gNMIc succeeded in delivering on that promise.

Given the central piece that collection capabilities take in gNMIc, it makes sense to spend some additional time on collector's core components.

Streaming Telemetry is often perceived as glorified monitoring that can tolerate outages. Not really, no.

Modern telemetry systems are essential for observability, diagnostics and starting to play a vital role in network automation; Because of that importance, an outage is undesired and should be avoided. For that reason, a Streaming Telemetry collector needs to support High Availability and resiliency. 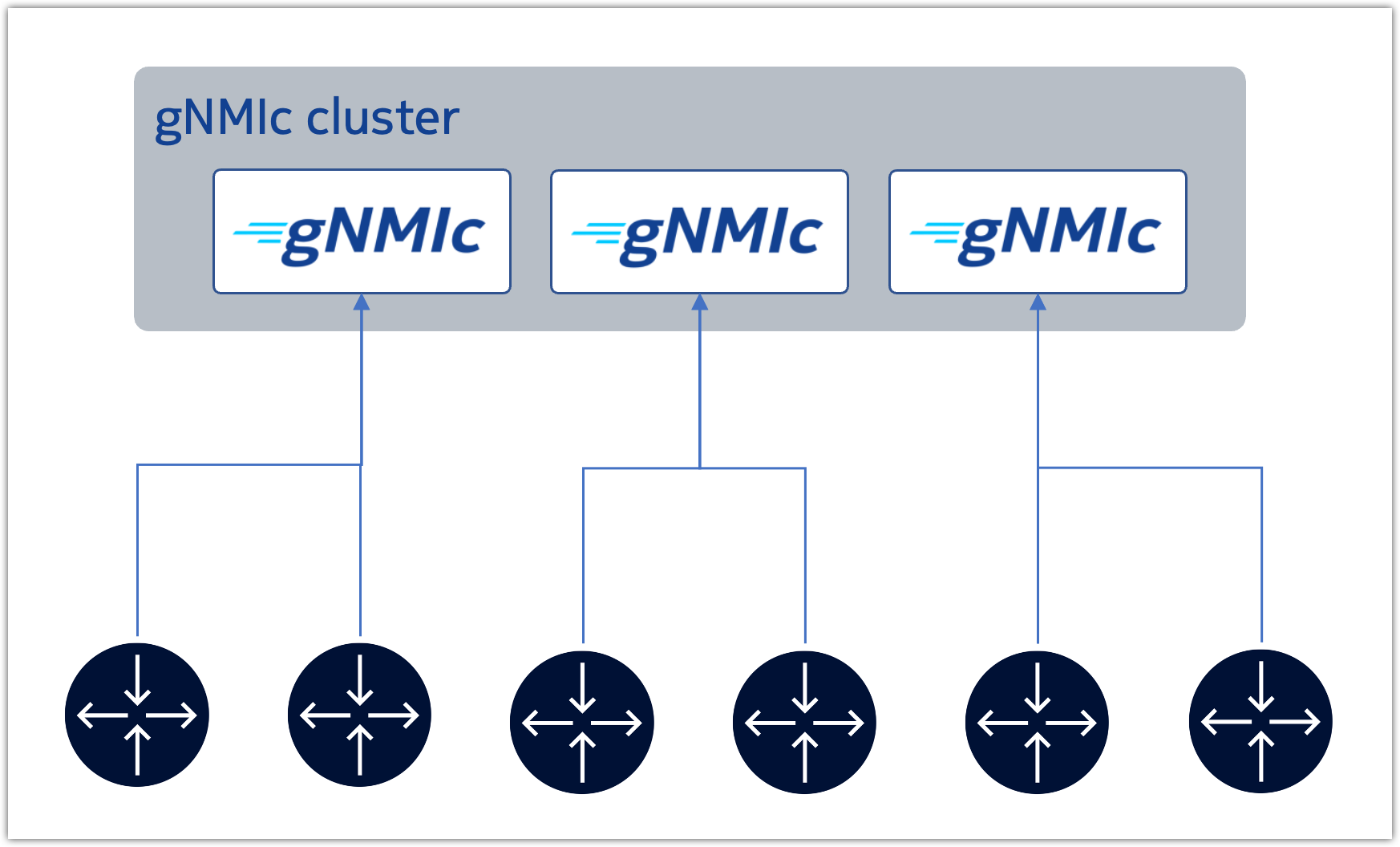 A cluster of gNMIc instances distributes the load by locking the targets to certain instances of the cluster. When the cluster is healthy and operational, targets are assigned to specific gNMIc nodes; in the case of a gNMIc node failure, its targets are going to be moved to a healthy gNMIc node.

Adding gNMI targets to the config file works as long as the number of targets stays reasonable and constant. More often than not, in production deployments, the number of targets is quite large. And what is even more critical, targets are being added/removed over time.
Consequently, it is desirable for a controller to be able to discover and load targets automatically.

gNMIc supports the dynamic loading of gNMI targets from external systems and services. This feature allows adding and deleting gNMI targets without the need to restart gnmic. 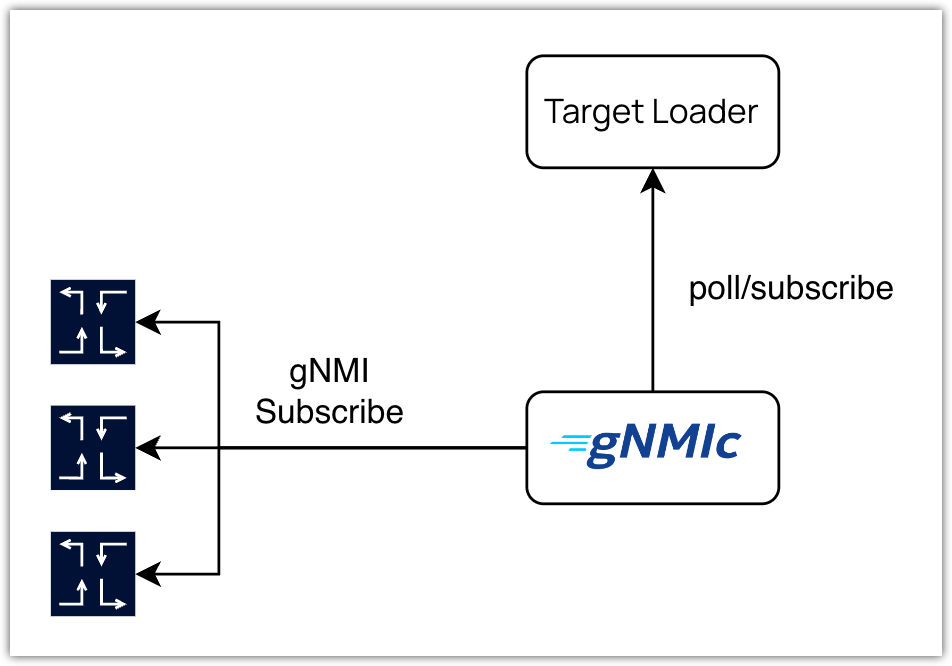 Targets can be loaded from the following sources:

No collection service can live without a data processing pipeline. Data that the users typically collect from the network elements often requires some processing before it can be stored in a database.

Let's have a look at a few examples where processing is mandatory:

gNMIc employs a large set of processors that can help you transform and shape your data the way you need it. Processors can form processing pipelines and be associated with any configured output to enable flexible data pipelines.

Processors become invaluable when Streaming Telemetry leaves the lab's sandbox and gets applied in production where dragons lie.

A Streaming Telemetry typically doesn't store collected data; instead, it pushes the collected and processed data to an output, such as a Time Series Database (TSDB), a message bus, or a file.

Various supported outputs make a streaming telemetry collector versatile because it can be deployed in different data pipelines. gNMIc supports a solid number of outputs categorized as databases, message queues, and files. 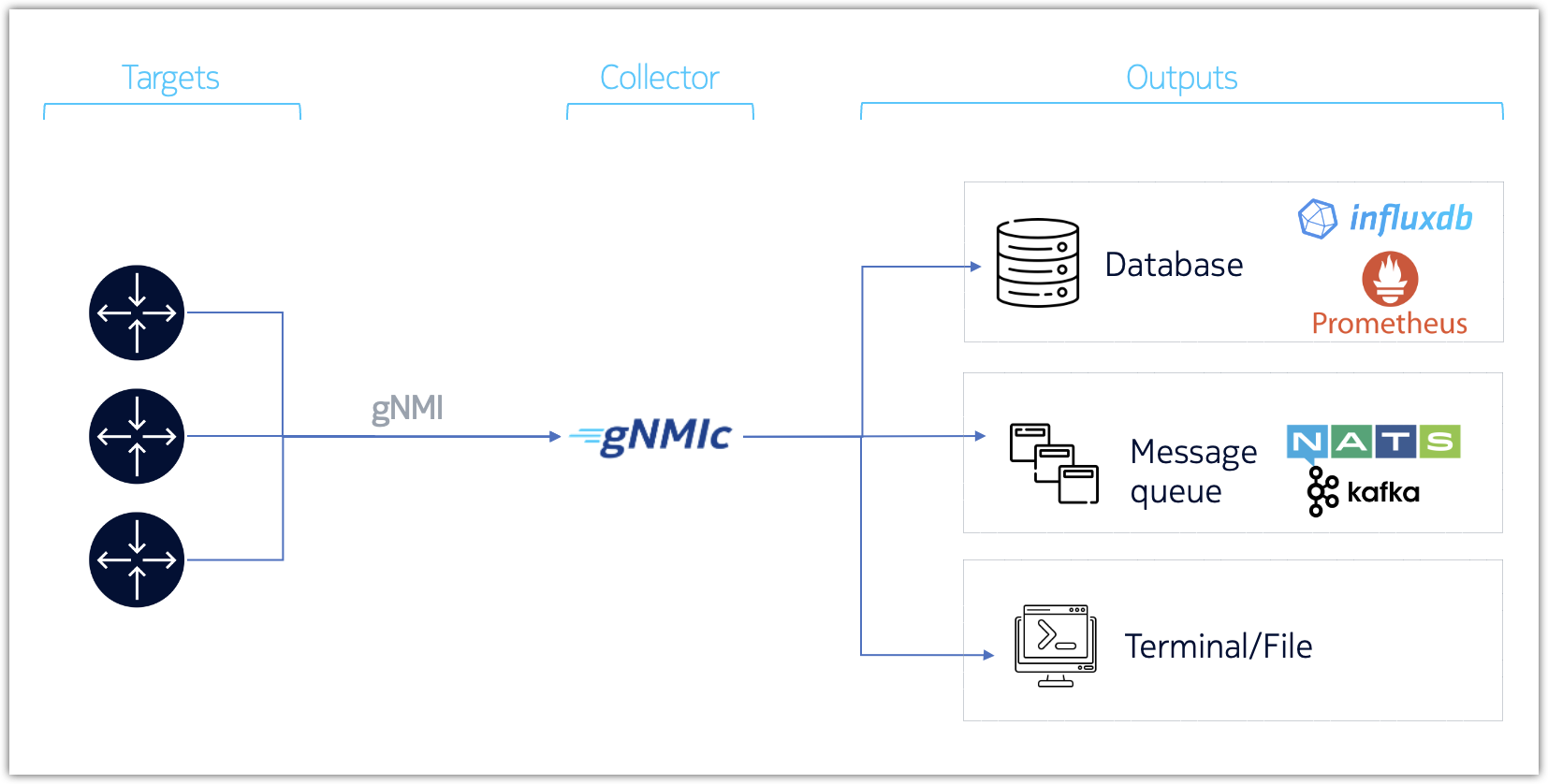 Most popular and used outputs are already supported by gNMIc:

With a powerful concept of multiple outputs, users can write their metrics to different data stores and create advanced data pipelines.

Complex telemetry pipelines might be built using gNMIc's concept of inputs. With inputs, gNMIc is able to receive gNMI data not from an end-device such as a router but from another gNMIc instance.

This powerful technique enables users to build a distributed cluster of gNMIc collectors that export the data to a single collector upstream.

Dial-out Streaming Telemetry has been a custom thing for quite some time. gNMI specification only specifies the dial-in model where a collector initiates the session towards the gNMI-enabled targets, and not the other way around. But being able to initiate a connection from the router towards a collector is sometimes desirable or even mandatory.

To accommodate for that deployment scenario, vendors implemented custom gRPC services that catered to this use case. And recently, the Openconfig group proposed a standard approach to enable dial-out gNMI telemetry using openconfig/grpc-tunnel project.

gNMIc is the first open-source collector that implements grpc-tunnel specification and thus can support deployment scenarios where dial-out is needed using a proposed standard approach.

All those features make gNMIc quite versatile and powerful, but at the same time, it might be overwhelming for newcomers. With that thought in mind, gNMIc packs many deployment examples that should help users get going quickly and smooth. 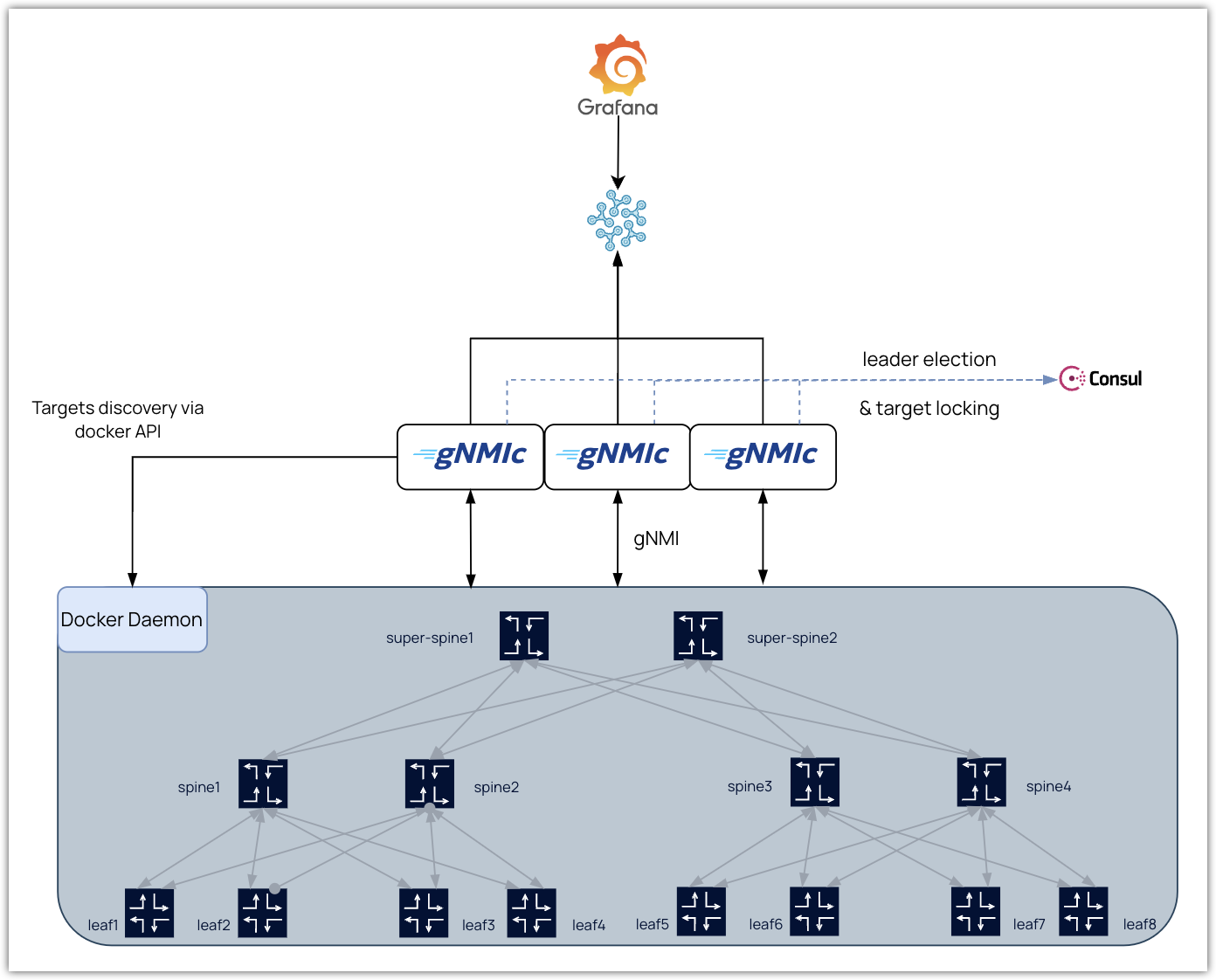 A deployment topology from one of the examples

gNMIc deployment examples provide users with a complete use case explanation. Moreover, every example comes with a ready-made virtual testbed2 so that you can try the scenario for yourself.
The examples typically include a gNMIc instance with its configuration, the rest of the Telemetry stack (TSDB of choice plus Grafana), and a virtual network to extract the data.

Many other things and improvements were made to gNMIc, making it even more powerful.

This question may very well still be on your mind when you reach this chapter. And now, when we walked over the collector's features, it is evident that most of those features are simply not available in Telegraf. Clustering, high availability, target discovery, hierarchical deployments are all unique to gNMIc. 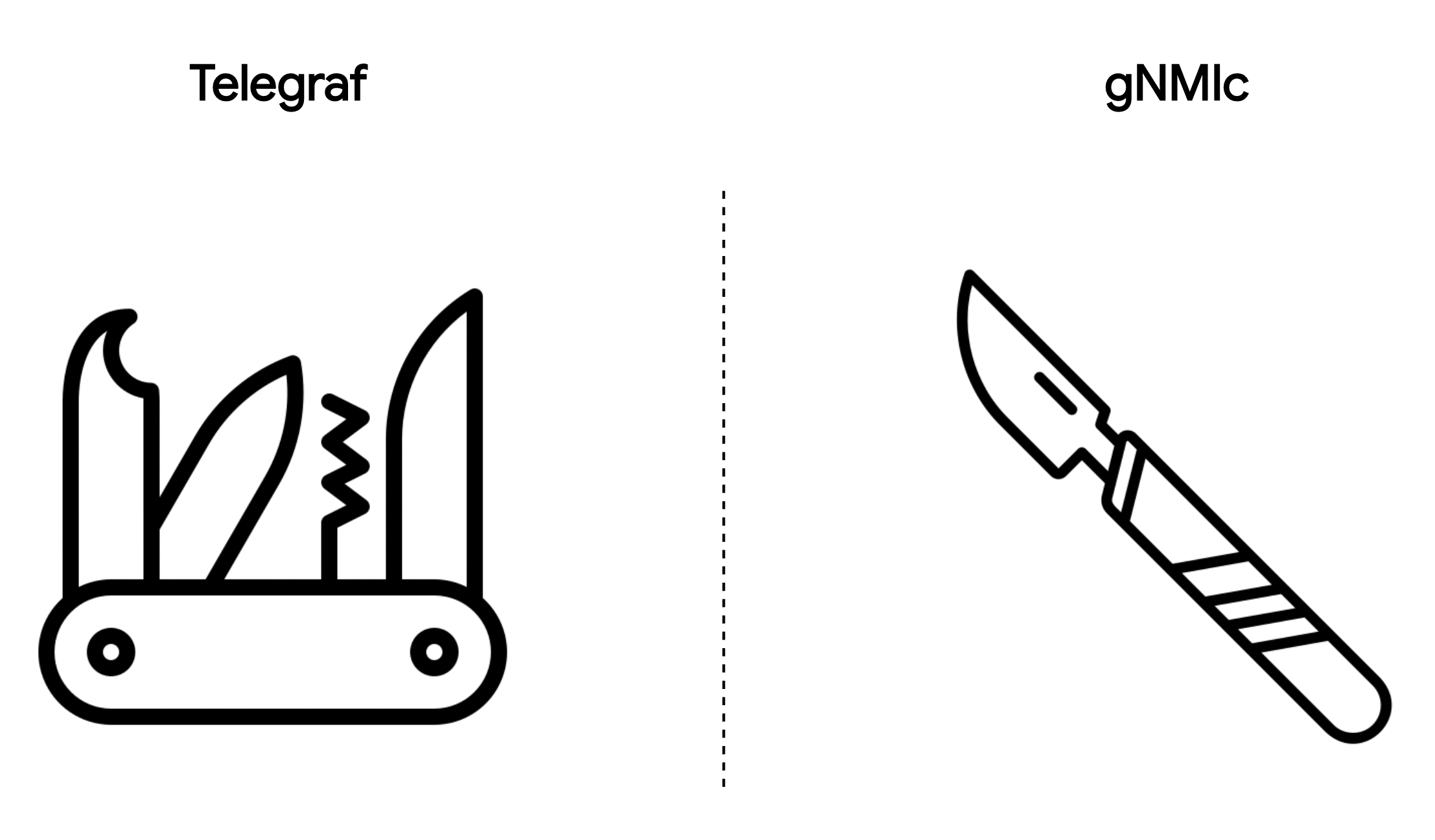 Telegraf is an excellent product, don't get me wrong, but when it comes to gNMI it is a swiss knife vs. a surgical scalpel.

With a friendly API, we expect to see an uptake in gNMI as a network management protocol being used programmatically. Go get it!

Now to the meat of it. Nokia donates gNMIc to the Openconfig group. But why moving?

I believe there are several interdependent areas of improvement worth indicating.

There is a lot of wishful thinking, and we don't know if everything we wish to accomplish will materialize, but we would like to give it a go.

Karim, as the sole developer, will still be at the helm of gNMIc development, but we expect more contributors appear in the future.